CD Review: The Morning Birds Pile On "The Quickening" 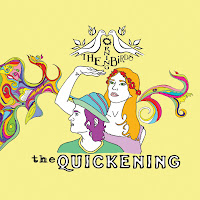 The duo of Jennifer Thorington and Samuel Markus have created one of the most creative independent music groups of the last two years. The Morning Birds' debut album, "Inspiration Point" garnished them as one of the NRG Theory "Artist Picks Of The Week". The duo have been extra busy readying their new release "The Quickening" which features 22 songs ranging from acoustic pop to folk hip-hop.

The Morning Birds seem to feel most comfortable with the acoustic strumming of "De Light" and "It's Then You'll Know", but the duo does experiment a bit more. The duo capture the feeling of solitude on the opener "Blue Moon" with gentle flowing beats and keyboards to back-up Jennifer's innocent vocals. The dance beats of "Resonance" and "Rose Horses" show another side to the band's song-writing. The album features little snippets of music and voice combinations that show the duo having fun in the studio. The album also features some guest vocals by Trevor Hall on "Oh Yeah!" and Kieran Blake on "Sunset Drive". Samuel gets in on the vocal action in the alternative hip-hop sounding "Take Control", but the band excels when Jennifer's lyrics are free to roam.