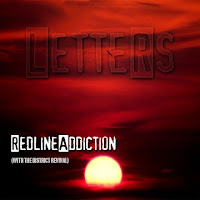 One of the newest band’s to come from Washington D.C. is Redline Addiction. The band released their debut album in the spring of 2008, receiving great reviews in the D.C. area. The band returned last year with their follow-up album, “Letters” released on Counterpoint Records.

Redline Addiction was planning on releasing an acoustic EP, when inspiration struck and the band decided on making it into a full-length LP. Some of the songs kept the acoustic-only sound while others received the full-band treatment. The lead song from the album, “Sadie” has a nice gentle flow to the lyrics along with the band’s laid-back sound. The first song to appear acoustic-only is “He’s Not A Bad Friend, Just A Lousy Lover”. A great sounding song with radio-pop friendly lyrics, but you can’t help wonder what the potential of the full-band would bring to the song. The band never really explodes with their sound, but the early 90’s grunge influence shines through on the Candlebox sounding “Shelter”. The softness of the acoustic guitars works great with the addition of some wonderful lyrics for the song “12.30.06”. The band returns to their alternative rock sound in “Fractal”, but only for a moment before returning to the soft, folk storytelling of “Head Over Heals” and “22nd & Long”.

Redline Addiction are currently preparing their third album for a fall of 2011 release. Also watch for the band to tour behind their new release. Visit redlineaddiction.com to stay up-to-date with the band’s happenings.
Posted by JP's Music Blog

Good review. I've seen these guys a couple of times in Maryland, and they always put on a great live show.

This blog is really awesome...keep up the posts!