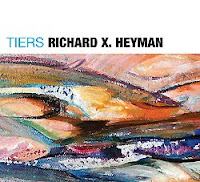 Singer/songwriter Richard X. Heyman returns with a brand new double-album. The two new releases entitled "Tiers" and "And Other Stories" could be thought of as two separate albums. "Tiers" is considered a concept album with all of the songs referring to an autobiographical story of Richard meeting his wife and the hardship he had to deal with. The second disc, "And Other Stories" is made up of brief stories set in New York City.

The grand introduction of "Tiers" begins with Richard's wonderful high voice amongst an orchestra of sound in the song "Hot On The Trail of Innocence". The album takes a more pop-sound with the songs "Golden In This Town" and "Fire In the Country". Richard's voice in "Good To Go" can easily be mistaken for Elvis Costello in this laid-back country setting. Richard's song-writing excels on "Yellow And Blue" and "One Thing I Still Have" as his music sets the mood for his stories. The overall feel of this album is that of a musical with his songs painting such a vivid picture in your mind.

The second part of this double-album is full of different music genres. Richard X. Heyman tackles the opera with the Sting-like sound of "Agnostic's Prayer", while "Birds" is folk storytelling at its best. Richard comes to life with the modern rocker "Branded In the Sky" before returning to his piano for "No Time To Rest On Sunday". The lyrics and songs are so well done that you can picture the stories unfolding in you mind as in "When Willy Played Guitar" and "The Finish Line". With so many different types of music on this album, it's tough to grasp the overall feeling that Heyman is trying to portray.

Don't pass up the opportunity to hear all these wonderful stories and great music. Please visit Richard X Heyman's website (richardxheyman.com) to get a copy of this album for yourself.
Posted by JP's Music Blog