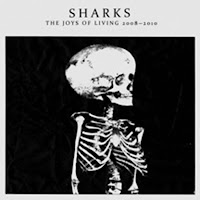 British rockers the Sharks are hitting the US shores this summer as a member of the Vans Warped Tour. They will also be touring this spring with Social Distortion and Chuck Ragan. The band's debut album "The Joys of Living 2008-2010" was released on April 5 on Velvet Scene and Rise Records.

The band mirrors their English punk forefathers, The Clash, with their explosion in sound on "The Joys Of Living". Lead singer James Mattock's vocal delivery on "Trains" is as powerful and raw as you'll find in punk music. The ghost of Joe Strummer has taken over his voice as he delivers the perfect pitch for these songs of rebellion. The band just keeps the throttle on in "Three Houses" and "Capital Youth". Songs like "Common Grounds" and "Fallen on Deaf Ears" is exactly the energy that alternative radio needs to grasp in their daily rotation.

Visit the Sharks facebook page (facebook.com/sharksuk) to hear the band's new single "Sweet Harness". Also check out their complete list of tour dates that run to the middle of August.
Posted by JP's Music Blog