CD Review: The Waifs Draw You In With Their "Temptation" 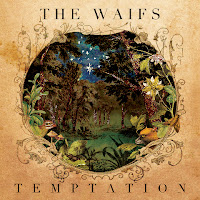 Australian band The Waifs released their new album on March 4 entitled "Temptation". The band has garnished numerous platinum albums and awards in their 19 years together and their newest album reflects that. It is just the perfect folk album to have in your collection.

The album leads off with the slow jaunt of "I Learn The Hard Way" with Vikki Thorn's voice drawing similarities to The Pretenders' Chrissie Hynde. The songs strum along softly with the gentle touch of "Buffalo" and "Sometimes", but the band does open up with the quick-step of "Falling". The band enwraps you with their music then takes you on a journey with their lyrics as displayed in "Drifting Dreaming". The Waifs also show us their masterful storytelling on the 7-minute folk epic "Temptation" while their harmonizing on the closer "Goodbye" is just wonderful.

The Waifs just finished a two month tour, but look for them to be back out on the road this summer. Check out their website, thewaifs.com for album information, tour dates and more.
Posted by JP's Music Blog