CD Review: Within Temptation Are 'The Unforgiving" 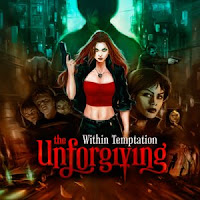 Dutch rock band Within Temptation have just recently released their newest album “The Unforgiving” on Roadrunner Records. The band has won numerous TMF (The Music Factory) awards since 2002 and has garnished gold and platinum status in their home country on past albums. Within Temptation are looking to break out big in the U.S. with this new album.

The album’s first single, “In The Middle of the Night” is the combination of a hard rock and symphony music clashing together with lead singer Sharon den Adel leading the way with her powerful vocals. The atmospheric “Fire and Ice” gets lost between the heavy hitting energy of “Faster” and “Iron”. The song “Sinead” get a heavy dose of keyboards among a backdrop of drums and dance beats. The gentle beginning of “Lost” highlights the power behind Adel’s vocals in this heartfelt power ballad. Within Temptation come roaring back with the vicious, grinding guitars of “Murder” and “A Demon’s Fate”.

Within Temptation will be visiting the U.S. in early September. Please visit the band’s website (within-temptation.com) for a complete list of tour dates and well as up-to-date information on this amazing band.
Posted by JP's Music Blog