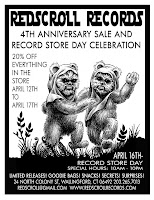 Tomorrow, April 16th, is the fourth annual Record Store Day. It is a day were the small “Mom & Pop” record stores come together to celebrate music. Many of these stores throughout the world will be selling exclusive Record Store Day items by some of the biggest names in music. Not only that, but these stores will also have some massive sales to entice you.

Bands such as the Foo Fighters, Beastie Boys, Jimi Hendrix, R.E.M. and tons more will be releasing special, one-time only releases on vinyl, CD or both. Some of these items are very limited and may not be at every store, but I’m sure there will be plenty to choose from at your local record store. For a complete list of releases, please visit recordstoreday.com/SpecialReleases. Plus, this year, Ozzy Osbourne was selected as ambassador of Record Store Day.

Wallingford’s Redscroll Records is also celebrating their 4th anniversary along with Record Store Day. They will be having a ton of free giveaways along with 20% off everything in the store. Be sure to show up early if you want the best selection. Another Connecticut store with some huge Record Store Day deals is Newbury Comics in Manchester. They will be featuring 20% off all of their vinyl as well as 30% off their entire selection of used CDs and DVDs.

Tomorrow is the perfect opportunity to build up your record or compact disc collection. Even if you are not a big music collector, tomorrow is the day to celebrate your local record store and show them just how important they are to be around.
Posted by JP's Music Blog

I'll keep it plain and simple.... JLO is back and BETTER than ever!... from the worldwide smash hit on the floor to im into you... she sounds fresh,renovated and believe me when i tell you that,this album will lift your spirit up!... so just dance the night away,life your life and stay YOUNG on the floor! :