CD Review: EMA Brings Up Her "Past Life" 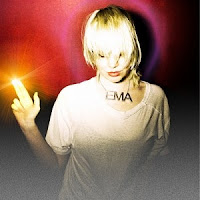 EMA is the new project from ex-Gowns singer/guitarist Erika M. Anderson. Her new album entitled “Past Life Martyred Saints” was released on May 10 through Souterrain Transmissions. EMA is considered by Spin magazine to be one of the best new artists to watch in 2011.

The eerie whisper-like vocals of the albums opening track “The Grey Ship” gets lifted by the just a simple bass line that gives the song life. The vocals in “California” give the song a punk rock attitude with an orchestration of sounds weaving through the lyrics. The music in “Anteroom” mirrors the vocals as the song builds up to its climax. The harmonizing a “Coda” shows us the potential in Erika’s voice before returning back to her whisper-like vocals in “Marked”. EMA gets whipped into a frenzy by attacking the lyrics of “Butterfly Knife” before finishing with the subtle, slow-building song, “Red Star”.