CD Review: The Felice Brothers Welcome You To "Celebration, Florida" 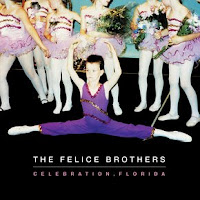 The Felice Brothers have recently released their Fat Possum debut “Celebration, Florida”. The album was recorded in the gymnasium and theater of an old high school in Beacon, NY. The experimentation paid off as The Felice Brothers expand on their Americana, roots sound.

The big, up-tempo sound of the opener “Fire At The Pageant” is a nice contrast to the slow, eerie piano of “Container Ship”. The carnival-like organ beginning of “Honda Civic” gets taken over by rock-like drum beat and the blare of horns. The song “Oliver Stone” seems to drag-on before the waltz-like tempo of “Ponzi” grabs your attention. The simplicity of “Back In The Dancehalls” is a nice touch, showing another side to the band’s song-writing. Singer, guitarist Ian Felice does his best Bob Dylan impression on the folk ballad “Dallas”, then the band returns with the big banging drums of “Cus’s Catskill Gym”. The album closes with the acoustic folk storytelling of “Best I Ever Had” and haunting, preaching of “River Jordan”.

The Felice Brothers are currently on tour, performing at the B.O.M.B. Festival in Hartford, CT on May 28th. They will also me making an appearance at the 2011 Newport Folk Festival in July. Please visit the band’s website, thefelicebrothers.com, to hear a complete stream of the new album and also for videos and tour dates.
Posted by JP's Music Blog