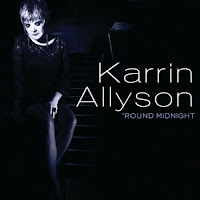 Grammy nominated vocalist Karrin Allyson returns with her new album entitled "'Round Midnight". Released at the beginning of May on the Concord Jazz label, Karrin sets the mood with her sultry vocals while letting the music breathe on its own. This new album is her tribute to some of the greatest songwriters in history.

She begins with a the soft, smooth jazz of "Turn Out The Stars". Her vocal delivery is uncanny on this composition. Karrin does a masterful job taking the Paul Simon penned "April Come She Will" and making it her own while keeping true to the original. Karrin Allyson really shines on the simple, but powerful rendition of Charlie Chaplin's "Smile" singing and performing piano on this and all the songs on this album. All of her renditions just keep a gentle flow of music with Karrin's vocals accented by her wonderful backing band.

Karrin Allyson will be featuring performances from her new album at live shows beginning in the Northeast with dates in Boston and Northampton, MA. For a complete list of her tour dates as well as information on her new album, please visit karrin.com.
Posted by JP's Music Blog