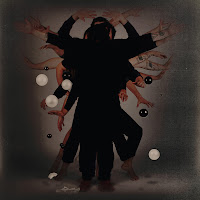 From Chicago comes A Lull with their debut album "Confetti". The album was released back in April through Mush Records. The band strives on layering sounds and vocals to create a musical masterpiece. Their overall sound is hard to describe, but it will definitely catch your attention.

A Lull uses a repetitiveness of vocal sounds to create the background which then gets taken over by the bashing of drums in the album's lead track "Weapons of War". The songs become a sort of game between the band and the listener to try and figure out what is being used to create the music in songs like "Mammals" and "Water & Beasts". A Lull try to simplify their sound in the more gentle sounding "Some Love" and "Sidemen". They try to reach a more mainstream sound on "Dark Stuff", while keeping their originality intact. "Phem" sounds like a lost Peter Gabriel song that was transported into the future. Their sound is definitely one to behold and explore.

A Lull just finished up a tour with Cold War Kids and performed at this year's SXSW festival. They will be performing at the NXNE festival in June before heading back out on the road. Check out the band's website (alull.com) to get a taste of this music for yourself.
Posted by JP's Music Blog