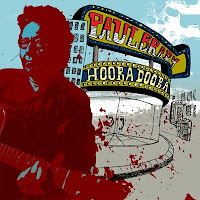 Singer/songwriter/guitarist Paul Brady returns with his first solo album in 5 years. "Hooba Dooba" brings the music icon back into the limelight he so deserves. Paul Brady has been hailed by many great artists including Bob Dylan, Bonnie Raitt and producer Gary Katz to name only a few. His new album was released on May 24 through Proper Records and features guest appearances from Jerry Douglas and Sarah Siskind.

The new album begins with a couple of pop stand-outs "Cry It Out" and "Rainbow". The latter spotlighting Jerry Douglas on lap steel guitar. The album really takes off with the wonderful song-writing of "The Price Of Fame" as Paul Brady looks back on his career. The fragility in his voice trying to hit the high notes in "On More Today" only adds to the songs overall appeal. Paul Brady steps into the blues on the acoustic, back porch strumming of "Follow That Star". Paul pours his soul into the heartfelt ballad "Mother and Son", then returns with an acoustic folk cover of The Beatles' "You Won't See Me". The album finishes strong with the wonderfully balanced "Living The Mystery".

Paul Brady has some scattered dates this summer all over Europe, mostly performing at festivals. For more information, visit Paul's website, paulbrady.com and make sure to check out his new album.
Posted by JP's Music Blog