CD Review: Pete Droge Wants You To Know That He Is "A Lot Like You" 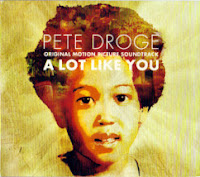 Alternative folk musician and former member of The Thorns, Pete Droge, written and recorded the soundtrack to the documentary film "A Lot Like You". Pete also become part of the creative team on the movie, getting credit as the film's producer. Pete performs all the instruments himself, except for the accordion on "Dinner" which was supplied by Nova Karin Devone.

The songs on this album are a gentle flow of string instruments as Pete tries to set the tone for the movie's soundtrack. His performance will be familiar to fans of his music, while new fans will enjoy the subtle instrumentation he adds in his music. Most of the songs on the soundtrack are short snippets of music that grab your ear for a moment before passing it on to the next song. Pete does not supply any vocals on this album as his music sets the mood for him. Also included are songs from his 2006 album, "Under The Waves". Those songs were reworked and re-recorded for this soundtrack.

The album was released on May 24 through Puzzle Tree Records and is available through Pete Droge's website puzzletreemusic.com.
Posted by JP's Music Blog