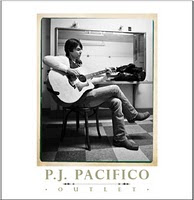 Connecticut's own singer/songwriter, P.J. Pacifico, will be releasing his new album on June 7 entitled "Outlet". The album will be on Viper Records and was produced by Grammy Award Winner Dave O'Donnell (James Taylor, John Mayer). P.J. is currently performing in the Connecticut area to promote the new album.

His radio-friendly sound is captured perfectly in the album's first two singles "Fold Up Your Heart" and "Head's Up". P.J. shows a maturity in his song-writing as the songs on this album are more than just another pop song with no meaning. His songs capture a feeling and accurately paint a picture in your mind of the story he's trying to portray to the listener. P.J. invites you into his world in "Home With Me" giving us his story of love for his wife. The song "Lakeshore Drive" displays the gentle, smoothness in P.J. voice as he draws you in with his storytelling lyrics. The simply titled "New Song" shows us the fun and wittiness in P.J.'s song-writing as the sound flows similar to Jason Mraz. The album closes with his tribute to one of his heroes, Buddy Holly, performing the song, "Targets" in a "Peggy Sue" swing-style.

P.J. Pacifico will be performing solo this evening at the Southport Coffee House before continuing on May 7 with his band in Fairfield, CT. P.J. will be returning to the area again at the end of the month performing in Bridgeport. For a complete list of tour dates and album information, please visit pjpacifico.com.
Posted by JP's Music Blog