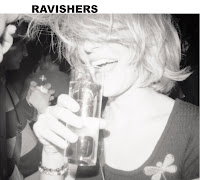 From Portland, Oregon comes the Ravishers with their self-titled, full-length debut album on Timber Carnival Records. The core members of the group, Dominic Castillo and Jonathan Barker, have invited an assorted cast of musicians to help with the album.

The album starts off with the slow build up of "I'm Him", first with low, subtle lyrics before reaching the simple, memorable chorus. Dominic shows off his pop music song-writing skills on the catchy sounds of "Keep You Around". The band plays around to perfection with the music of "The Chase", but seems to try too hard with the fuzz guitars of "Underachievers". The mellowness of "Pinhole" seems like the right combination of Castillo's lyrics/vocals and Barker's subtle guitar. The band tries their hand once again at a more aggressive alternative rock song in "Lesson In Leaving" with more success, but quickly return back to the pop sounds of "How I Feel" and "Nobody Falls In Love Anymore".

The Ravishers are preparing for their summer tour. Check out the band's website (ravisherstheband.com) for updates and album information.
Posted by JP's Music Blog