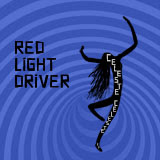 From the Midwest comes the new release from Red Light Driver entitled "Celeste Celeste". This EP is the follow-up to their 2010 experimental EP 'UFO Lost". The band took a more alternative, pop rock approach to four of the six songs on their new album.

The raw, almost-punk like sound of lead singer Derek Osgood on the album's opening track is a good introduction to the band. The song sounds like it comes from the streets of British Punk with just a touch of modern rock to smooth their sound. This formula also holds up for "Diamond Rough" before the EP closes with the experimental, atmospheric "Canterbury Tea". The EP also contains two short musical sections, "Enchanting" would maybe be better placed at the end of the album, while "Interlude" is a nice instrumental. I only wish that it was longer than 1 minute. Maybe they are saving that for the next full album.

Red Light Driver are playing a few select shows this summer while preparing for the release of the upcoming full-length album. Visit the band's website (redlightdriver.com) for more information.
Posted by JP's Music Blog