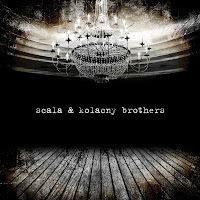 The combination of the Scala choir and the Kolancy Brothers has produced nine albums featuring their versions of cover songs by some of the biggest rock artists of the last two decades. The all girls choir comes from Belgium and is conducted by Stijn Kolacny with arrangements by his brother Steven Kolacny who also performs piano. Their new release “Scala & Kolancy Brothers” is a sort-of “greatest hits” package including songs from their past albums.

The all-female choir definitely put a different spin on the hard rock ballads “Nothing Else Matters” (Metallica) and “Everlong” (Foo Fighters), but these versions never seem to add anything extra to the original songs. It has to be difficult to reinterprete songs that are so well-known and famous that you can’t help but compare them to the original. The Scala choir does show the power in their united voices on Alanis Morissette’s “Ironic” by belting out the chorus. The high-point of the album is their rendition of U2’s “With or Without You”. The song fits so perfectly with the choir, that it almost appears to be written for them to perform. The album also carries three original songs and finishes with two live songs that proudly display the talents of these wonderful voices.

After a successful U.S. tour, the Scala choir are finishing up the summer in Germany. They also have a new video out for their cover of the Kings of Leon song “Use Somebody”. To see the video, visit scalachoir.com. You can also check out their tour dates and album information.
Posted by JP's Music Blog