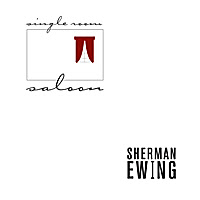 Singer/songwriter Sherman Ewing released his second solo album earlier this year as a digital-only release. With the album receiving much praise from critics and fellow musicians, a physical copy of the album “Single Room Saloon” will be released this spring. The new album was produced by Godfrey Diamond (Loud Reed, Aerosmith).

The thing that is appealing about Sherman Ewing is not only his wonderful storytelling lyrics as in “Heaven Waits”, but also how he portrays the sound of past folk troubadours like Bob Dylan and John Hiatt. The wonderful rhythm section of George Recile on drums and Tony Guarnier on bass help give Sherman Ewing’s words a distinct path to follow. The airy, open acoustics of “Flatlands” gets help from Widespread Panic’s Jo Jo Hermann on keys. The acoustic gentleness of “Walk On” is highlighted by the sweet harmonies and just a touch of organ from Ivan Neville. Other guests on the album are Phish lyricist Tom Marshall, guitarist Anthony Krizan from the Spin Doctors and trumpeter Michael Ray from Kool and the Gang among some others. Sherman Ewing pours his heart into this album which shows on “Bye, Bye America” and “Marilyn”.

Sherman Ewing has a CD release party scheduled for June 9 at Sullivan Hall in New York City. Do yourself a favor and visit shermanewing.com to hear song samples from the new album “Single Room Saloon”.
Posted by JP's Music Blog