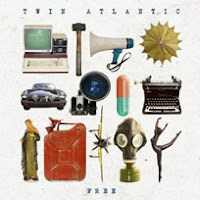 Coming from Scotland is one of the hottest new rock bands in the world. Twin Atlantic just released, “Free”, their follow-up to their 2009 critically acclaimed album, “Vivarium”. Produced by Gil Norton (Foo Fighters, Pixies), this album uses the band’s signature alternative punk sound as a foundation and just expands from there.

The album leads off with the energy of their first single, “Edit Me”. The sound is just an aggressive attack with Sam McTrusty’s vocals being matched by the lead guitar of Barry McKenna. The song “Time For You To Stand Up” shows us the band’s maturity in their song-writing, while “Dreamemeber” shows us the fun these four have performing together. The album’s second single; “Free” carries a strong, memorable chorus that becomes the battle cry for this generation of fans. Twin Atlantic show off their simple, softer side on the acoustic ballad “Crash Land” before Ross McNae’s bass groove welcomes “Make A Beast of Myself”. The drums of Craig Kneale power the band through “The Ghost of Eddie” leading into the instrumental “Serious Underground Dance Vibes”. The album does lose steam and energy with the pop rock sounding “Wonder Sleeps Here” before trying to capture some of that energy with the closer “We Want Better Man”.

Twin Atlantic is currently on tour in Europe until the beginning of June. The new album was released on May 3rd through Red Bull Records. They currently have a video for the song “Free” which has been on rotation on MTV, Kerrang! TV, and Scuzz TV. For more information on this ever-growing band, please visit their website, twinatlantic.com.
Posted by JP's Music Blog