CD Review: The Wait Is Over For The Bynars 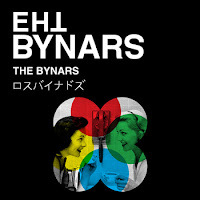 Pop rock takes a shot in the arm with the debut release from The Bynars. Their self-titled album is finally out and is worth the wait. After teasing their fans with singles, we finally get a complete work.

The album shows a band having fun, performing light-hearted sounding pop rock gems. The formula of harmonizing vocals, memorable choruses and just enough rock is one the band has been working on for many months prior to the album's release. Songs like "Steal My Sunshine", "Ba, Ba, Ba" and "Angeline" are just a blast to listen to with its simple sounds and unforgettable lyrics. The Bynars expand their sound slightly with the more up-tempo, keyboard friendly "Haunted House" before returning back to their love of pop sounds in the album closing anthem "Love Explosion".

The Bynars have dates lined up through July in the New England area. Please visit their website (thebynars.com) for song samples, music videos and a complete list of tour dates.
Posted by JP's Music Blog