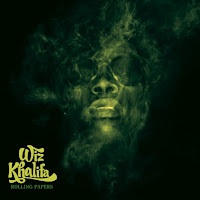 Hip-hop artist Wiz Khalifa is being hailed as one of the hottest new artists of 2011. His new album “Rolling Papers” is his major label debut and was released at the end of March. The album entered the Billboard 200 Album chart at #2, selling almost 200,000 in its first week. So far, Wiz Khalifa is living up to the hype.

Don’t let the piano intro fool you; Wiz Khalifa is all about big beats and smooth rolling lyrics. The mellowness of “On My Level” lets you absorb his lyrics without overtaking you with the music. His #1 single, “Black and Yellow” best displays the successful formula of Wiz Khalifa with a repetitive chorus that gets drilled into you mind and beats that can’t be denied. His second single “Roll Up” continues along the same lines as his first successful single. The beats and rhymes of “Wake Up” are sure to be another hit single as Wiz gives you his blueprint for success. “No Sleep” was a digital-only released single that reached #6 on the Billboard Hot 100 singles chart, but seems too safe and predictable a song for Wiz. The more experimental songs like “Top Floor” and “Fly Solo” allow for Wiz Khalifa to spread his wings and take more chances on his songs.

Wiz Khalifa’s Rolling Papers 2011 tour is currently overseas before returning at the end of May with appearance at the B.O.M.B. festival in Hartford, CT and the Bonnaroo Festival in June. For more information on Wiz Khalifa and his new album, please visit wizkhalifa.com.
Posted by JP's Music Blog

Great man This blog is fully read all article is ok easy understandable. You keep update the blog this is one of the great job man. I should pass the url to my friend for gatering some news from this blog. Good keep it up.