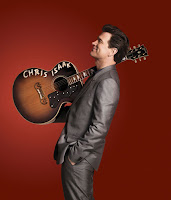 With a musical career spanning over 25 years, Chris Isaak has made a name for himself as one of the ambassadors of early rock 'n' roll. He has been compared to the likes of Roy Orbison and Johnny Cash, but with a Hollywood smile. His latest tour had him promoting his two year old release "Mr. Lucky" as he made his way to the MGM Grand Theater at Foxwoods Sunday night.

As the sound of a train pulling into the station rang from the speakers, Chris Isaak emerged from the side of the stage in a black cowboy suit with white sequins. Isaak and his backing band, Silvertone, dove right into the music beginning with the lesser known "Beautiful Homes", "Dancin'", and "Flying". Isaak was also in very good spirits joking with the audience and even taking a stroll through the crowd during "Don't Leave Me On My Own". He got everyone up on their feet during "All I Want Is Your Love" doing the "forbidden dance of love" as Isaak called it. The band was set on cruise for much of the first half of the show, coasting through the hits "Wicked Game", "Speak Of The Devil", and "Somebody's Crying". Then came the "rock and roll part of the show" that displayed the full power of the band with chorographed moves and solos by guitarist Hershel Yatovitz and pianist Scott Plunkett. A lucky lady from the audience found her way on stage during "Baby Did A Bad, Bad Thing" to dance along Isaak as he told the story of a woman falling in love with a musician.

The second half of their set focused on the group's new, yet to be released album that was recorded this past winter at the legendary Sun Studios in Memphis, TN. Chris Isaak ran through classic covers from Johnny Cash (Ring of Fire), Carl Perkins (Dixie Fried) and Elvis Presley (It's Now or Never). The 75-minute set closed with a roaring version of Jerry Lee Lewis' "Great Balls of Fire" which included a smoking piano solo from Scott Plunkett. The piano was actually smoking throughout the whole performance of the song as Isaak and his band rocked the theater.

Silvertone returned first to the stage for the encore beginning with a drum solo from Kenney Dale Johnson that lead into a guitar solo once again from Hershel Yatovitz. Isaak came back to the stage wearing his well-known mirror suit and stopped the band from diving into "Blue Hotel". He told the audience to come to the front of the stage as then continued with "Blue Hotel" which lead into the Elvis Presely ballad "Can't Help Falling In Love". A 30 ft. woman became the backdrop for the arousing Roy Orbison cover "Pretty Woman". Isaak finished the night alone onstage performing a heartfelt solo acoustic version of his 1995 song "Forever Blue".

90-minutes of good, old fashion rock and roll is all you can ask for from one of the torch carriers of great classic music. Chris Isaak delivered a well-balanced set of covers and originals while giving his all for his fans. Look for his new album of early rock 'n' roll covers later this year.

Setlist:
Beautiful Homes
Dancin'
Flying
Don't Leave Me On My Own
I Want Your Love
San Francisco Days
Wicked Game
Speak Of The Devil
Somebody's Crying
You Don't Cry Like I Do
Go Walkin' Down There
American Boy
Baby Did A Bad, Bad Thing
I'll Never Let You Go
Ring Of Fire
Dixie Fried
How's The World Treating You
It's Now Or Never
Ms. Pearl
Great Balls Of Fire