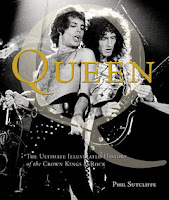 It is a great time to be a fan of the rock band Queen. Their entire musical catalogue is getting remastered and re-released with new additional material on bonus discs. Also just released from Voyageur Press is Queen: The Ultimate Illustrated History of the Crown Kings of Rock. The book is 288 pages full of beautiful full-color and black & white photographs that will be new to many fans of the band.

The book starts with the coming together of the band Queen with a little background history of each member. The book goes on to capture all the extreme highs and lows the band experienced during their entire career. Sprinkled throughout are quotes from some of the biggest names in music professing their love for the band. Other than all of the great pictures, illustrations and paraphernalia, one of my favorite things about this book is the band’s tour itinerary. Every stop that Queen has played is documented within. Also, the recording and the release of every album is discussed in depth that even long-time fans will enjoy reading.

The book was released in paperback on May 15 and retails for $24.99. Author Phil Sutcliffe has been writing about rock music since 1974 and also authored the great illustrated history of AC/DC. So whether you are just discovering Queen or you’re a long-time fan, you will not want to be without this book in your musical library. For more information about this release and other Voyageur Press products, please visit voyageurpress.com.
Posted by JP's Music Blog