CD Review: Biffy Clyro Tells Us It's "Only Revolutions" 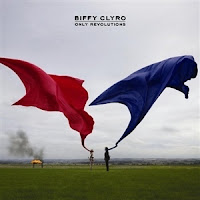 Scottish rock band Biffy Clyro finally released their latest album “Only Revolutions” in the U.S. The album was originally released back in 2009 in the U.K. and Japan, but fans all over the world were able to get a copy of their new album when it was released earlier this year. Their popularity exploded with the release of this latest album by earning them praise and awards from all over the world.

The album begins with one of six singles released from this album. The third-single, “The Captain” is like ear candy for alternative rock radio. The song won numerous awards like “song of the year” and “video of the year” from Kerrang!, NME and the Q Awards. Their sound is very polished and gets a big boost from the orchestration in “That Golden Rule” which carries a bit heavier rock sound. The band gets some guitar help on “Bubbles” from Queens of the Stone Age’s Josh Homme. The song sticks to a steady rhythm before exploding during Homme’s solo. The album’s last single “God & Satan” deals with a serious subject of religion as the band slows things down to stress the lyrics. The band’s highest charting single “Mountains” is a modern alternative rock masterpiece with its up-tempo sound and an inspirational, shout out loud chorus. The mellowness of “Many of Horror” is a nice break as it gets sandwiched between the hard rocking “Shock Shock” and “Booooom, Blast & Ruin”. The album closes with the rolling drums of “Whorses” that best shows the full force of this musical trio.

Biffy Clyro have some dates left in the U.S. before heading overseas for a handful of more shows. The band currently has a new live album available through their website (biffyclyro.com) as well as a full list of tour dates, videos and more.
Posted by JP's Music Blog

Awesome! I spent so much time trying to do this simple little thing... I even went as far as to build a website that streamed music, but Wii has trouble buffering past a certain point.