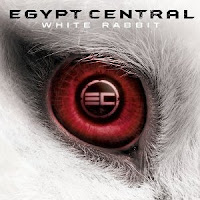 Rockers, Egypt Central return with their sophomore follow-up "White Rabbit". The new album was released on May 31 through Fat Lady Music. The band is looking to grow upon the success of their 2008 debut album and their new song "White Rabbit" is leading the way as a top 25 single on the Active Rock charts.

The combination of Blake Allison's drums and Jeff James' guitar on the opener "Ghost Town" sets the stage for an in-your-face, hard rocking beginning to the album. The title-song has everything you could ask for in a rock hit, sly lyrics about vulnerability with a powerful, up-tempo chorus while the band's music will make your speakers bleed. Egypt Central create an anthem for their fans with "Kick Ass", a song you can't help but shout the lyrics. They lighten their hard rock assault with "Change" aiming for a more radio-friendly sound. The band create a mini rock opera beginning with the up-tempo melody of "The Drug (Part 1)" and continuing with the slower, but darker lyrics of "Enemy Inside (Part 2)". The album finishes with the battle-cry of "Surrender" and the acoustic ballad "Backfire".

Egypt Central will be blazing a trail across the U.S. this summer with tour dates booked until mid-August. Check out the band's website, egyptcentral.net, for a complete list of tour dates as well as more information on the new album. Also be on the look-out for a new video for the band's single "White Rabbit".
Posted by JP's Music Blog