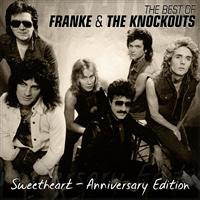 The 1980s return with a newly remastered greatest hits collection from Franke & The Knockouts. This new release comes on the 30th anniversary of the band’s debut release. The album contains songs from all three of the band’s studio albums and also includes two bonus tracks, the original version of the #1 hit song “Hungry Eyes" and the never been released “Beat of a Broken Heart”.

Originally out of New Jersey, Frank & The Knockouts hit it big with the release of their debut self-titled album which contained the Top Ten single “Sweetheart”. The band was no “one hit wonder” with two other Top 40 hits “You’re My Girl” and “Without You (Not Another Lonely Night)”. Grammy-winning songwriter Franke Previte had a talent for writing hook-driven songs that rocked. The band also boasted the talents of Tico Torres on drums prior to him joining Bon Jovi.

The music on this new release sounds even better than the original releases. Previte’s voice is crystal clear along with the guitar solos in “Comeback” and “Never Had It Better”. As the band’s sound moved more mainstream on latter albums, their edginess can still be hear on songs like “Outrageous”. This new release flows in chronological order, so you can hear the maturity in their song-writing over the course of three-plus albums.

Franke Previte is donating his portion of the proceeds to the Patrick Swayze Pancreas Cancer Research Fund. So pick up a copy of this lost gems from the past and relive the 80s and help donate to a great cause. For more information on Franke & The Knockouts, please visit the band’s website frankeandtheknockouts.com.
Posted by JP's Music Blog