CD Review: It's A "Radio Tragedy!" For Tea Leaf Green 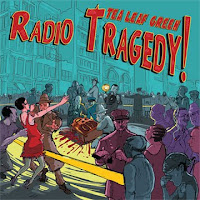 San Francisco jam band Tea Leaf Green just released their new album "Radio Tragedy!" on June 7. The band is known mostly for their extended live jams and community of fans. While some bands tour behind a new release, Tea Leaf Green has this new album to promote their tour.

The new songs found on this, the band's seventh studio album, are more radio-friendly and should attract more fans to Tea Leaf Green's wonderful song-writing. The songs seem to draw from many of their fellow musicians in the jam band community and beyond. "Easy To Be Your Lover" has singer Trevor Garrod doing his best to keep up vocally with Jim James of My Morning Jacket. The addition of new member Cochrane McMillan on drums adds to The Clash's punk-style drumming of "You're My Star". The acoustics of "My Oklahoma Home" and "Sleep Paralysis" adds more attention to the simple but affective lyrics of these two great songs. The band brings in some of their live sound on the experimental "Germinating Seed" which highlights the keyboard talents of Garrod. "Honey Bee" seems like the most pop oriented song on the album, but then the band counters that with "Arise" and "Nothing Changes" that proudly displays their jam band roots.

Tea Leaf Green are currently touring the east coast with two shows in Connecticut. Their first visit to the state this summer is at Toad Place in New Haven, CT on June 16, then they return on July 23 to perform at the Gathering of the Vibes festival in Bridgeport, CT. After that, they move out west to support Matisyahu on the rest of their summer tour. Visit the band's website, tealeafgreen.com for a complete list of tour dates and well as live recordings and information on their new album, "Radio Tragedy!".
Posted by JP's Music Blog