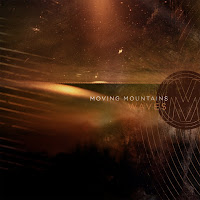 New York rockers Moving Mountains recently released their second full-length album entitled "Waves". The band recorded the album in a small basement to get that tight, united sound similar to their older releases. This album is also the band's debut release on Triple Crown Records.

The new music definitely rocks, right from the opening track "My Life Is Like A Chase Dream". Moving Mountains make you feel the passion and hard-work they puts into their music. The energy of "Where Two Bodies Lie" and "The Cascade" easily carry the album with its pure-rock sound and strong lyrics. The band shows their softer side on the heartfelt "Once Rendering" and "Always Only For Me" as the band tackles these songs with ease and dignity. Moving Mountains comes roaring back with the high-octane "Alleviate" before finishing with a more passionate, alternative-rock friendly "Full Circle".

The band is currently part of the 2011 Vans' Warped Tour. They will be making a stop in Connecticut on July 17 at the Comcast Theatre. Please visit their website (movmou.com) for a complete list of tour dates as well as information about the new album.
Posted by JP's Music Blog