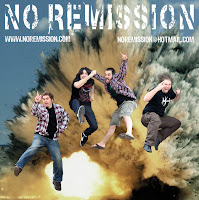 New York thrash metal band No Remission is releasing their third full-length album entitled "Through Blackened Skies". The band is having an album release party on June 18 at The Studio at Webster Hall in New York City.

The instrumentation on the new album is first class. The band switches tempos on the album opener "Carbon Copy" which works to their advantage to give the guitar solo its own spotlight. The band explodes with the lyrics of "All Hell Breaks Loose" and just continues to plow through with "Skeletal Messiah" and "Nine". The classical acoustic instrumental "Malevolence" is a nice way to break up the album before diving back into the onslaught of energy with "Rage Within". Some stand-out tracks include "This Plague Will Kill Us All" and "New Dark Age" as No Remission pays homage to their influences. The album closes with the 8-plus minute power of "Signal Loss", once again as the tempo changes breaks the song up nicely.

The band has two other shows lined-up in the New York area. Check out the band's Reverbnation website (reverbnation.com/noremission) for live dates as well as song samples.
Posted by JP's Music Blog