CD Review: Patrolled By Radar Want You To "Be Happy" 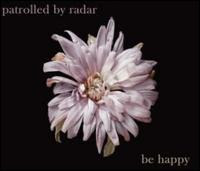 Alternative folk rockers Patrolled By Radar have released a new album entitled "Be Happy" on the Knitting Factory Records label. The band's sound is a mixture of Bob Dylan lyrics, with Ray Davies passion, add a dash of Johnny Cash swagger and throw in a Wilco-type musical journey and you have Patrolled By Radar. The album was produced by Los Straitjackets member Peter Curry in Los Angeles.

The opening song "Widow Next Door" is a slow, country jaunt with just enough guitar twang to give it an edge. The band take a more pop, alternative rock approach to "New Fight Song", giving the group a radio-friendly sound to attract the masses. The gentle acoustic strumming of "Dressed For The Drought" places the concentration on Jay Souza's vocals which draw similarities to Jeff Tweedy. The band's country sound comes shining through on mellow "Coat of Disappointment" and the up-tempo "Haywire". The song "Be Happy" has been featured on TNT's "Men of a Certain Age" as the band seems to have fun performing.

The band has a scattering of shows through June. Check out the band's website (patrolledbyradar.com) for a complete list of dates as well as videos from the new album.
Posted by JP's Music Blog