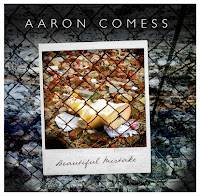 Aaron Comess has made his way around the musical community, performing with the likes of Joan Osbourne, Issac Hayes, and Andrea Bocelli just to name a few. Now, Comess is releasing his new solo album, "Beautiful Mistake". The fully instrumental album was recorded in Comess' home studio and includes Teddy Kumpel on guitar and Richard Hammond on bass.

The album shows Aaron's love for many different genres of music. Beginning with the relaxing folk/jamband sounds of "Truth". He also touches upon progressive rock ("Past Present & Future"), blues ("Bubble Blues") and country ("Stinky"). Aaron gives us a small taste of his skills on the skins with a drum solo during "Unleash the Beast" and shows us some gritty guitar work on "Dirt". This album works so well that you hardly notice the absence of vocals, which would only take away from the overall appeal to the music being performed.

The album was released on June 14 and Aaron Comess has a CD release show scheduled for June 30th at New York's Rockwood Music Hall. Look for Aaron to tour with the Spin Doctors this summer as the band celebrates their 20th Anniversary. Also check out Aaron's website (aaroncomess.com) for samples of his new album as well as a view of his entire discography.
Posted by JP's Music Blog