CD Review: Tedeschi And Trucks Team Up For "Revelator" 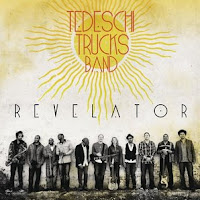 The husband and wife team of Susan Tedeschi and Derek Trucks are releasing their debut album "Revelator" as the Tedeschi Trucks Band. Singer/guitarist Susan Tedeschi has been touring along with her husband Derek Trucks as part of The Allman Brothers Band as well as with Trucks' solo band for the last few years. This combination seems like the most logical step in the career of these two outstanding performers. The duo also bring along an 11-piece band that includes members of The Allman Brothers Band and The Derek Trucks Band.

The album leads off with the electric blues of "Come See About Me" which finds the perfect balance of Tedeschi's powerful vocals and Trucks' slide guitar work. The song also features the smooth keyboard work of Trucks' bandmate Kofi Burbridge. Susan Tedeschi pulls off here best Janis Joplin impression on "Don't Let Me Slide" before Trucks' guitar powers the song to its finish. The band get their R&B groove on with the praising gospel sounds of "Bound For Glory". The slow, quiet blues of "Until You Remember" becomes the perfect opportunity for Tedeschi to show off her vocal abilities, which she does with ease. The mellow sound of "These Walls" finds the band experimenting by including the Indian sitar into the slow blues. The full-power of the band is felt in "Learn How To Love" as Trucks' guitar guides the way. The album closes with "Shelter" which is a slow-building blues song, similar to their live performances.

The Tedeschi Trucks Band have a full summer schedule of dates, including the Gathering of the Vibes festival in Bridgeport, CT on July 22. Check out the band's website, tedeschitrucksband.com for a complete list of tour dates as well as free downloads from the new album.

To give back to those who've supported them, Tedeschi Trucks Band is offering signed copies of their new album "Revelator." To enter for a chance to win, contestants need to retweet the following message through their Twitter account during the sweepstakes period:

RT this message for your chance to win a signed copy of the new album from Tedeschi Trucks Band, "Revelator!" @DerekAndSusan