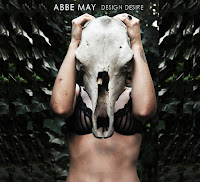 Australian native Abbe May is returning with her third album "Design Desire" and is ready to shake up rock radio. Two singles off the new album have already garnished attention in Los Angeles and in her home country of Australia. One of her songs was also featured on the new music website Spinner.com. The new album was released on July 8 on the Source Music/MGM label.

The deep, heavy guitar and pounding drums of the album's opening track "Design Desire" sounds like a call to arms as the song builds to its chorus. Abbe's voice is more noticeable in "Universes" as a simple, but effective drum beat pulsates through the song. But the most noticeable thing on this album is Abbe's guitar playing, which at times sounds like dirty blues as in "Cast That Devil Out" and at other times sound like grunge rock glory as in "Mammalian Locomotion". It seems as if Abbe has been taking notes from Jack White's playbook. Abbe softens her sound on the piano ballad "Blood River" and the playful "Feeling Like A Man, Looking Like A Woman". From that point on, the album never fully recovers from this slow-down, but the eerie storytelling drama "Carolina" gives the album a nice touch to end with.