CD Review: The Concord Music Group Rolls Out The Next Wave Of Jazz Remasters 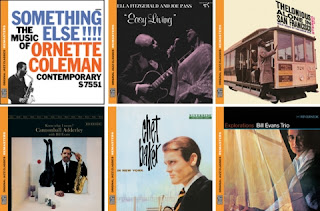 The Concord Music Group are releasing their next wave of the Jazz Classics Remasters. The six titles getting the treatment they deserve are Ornette Coleman "Something Else", Chet Baker "In New York", Thelonious Monk "Thelonious Alone In San Francisco", Bill Evans Trio "Explorations", Cannonball Adderley "Know What I Mean?," and Ella Fitzgerald & Joe Pass "Easy Living". Each of these albums were remastered by Joe Tarantino and some contain previously unreleased bonus tracks.

This 1958 album "Something Else!!!" is the debut of Ornette Coleman as a bandleader. This album was the first of his only two releases on Contemporary Records. Coleman wastes no time jumping right in on the album's opener "Invisible". The music on this album easily stands the test of time, over 50 years later. His time signatures on "The Blessing" and "The Disguise" were so different that fellow musicians questioned his approach to Jazz music. But one can't help the appeal of "Angel Voice" with the duel attack of Colman's alto sax and Don Cherry's trumpet. The album finishes with the amazing, tempo-changing, "The Sphinx" which set the stage for what the future held for Ornette Coleman. The newly released remastered album includes new liner notes from Neil Tesser.

Jazz great Chet Baker released his first album on Riverside Records in 1958 called "In New York". The album reflects the sounds of this city's spirit with the hustle of "Hotel 49" and the lonely nights of "Polka Dots and Moonbeams". Chet's band who included Al Haig on piano, Paul Chambers on bass, and Philly Joe Jones on drums have their day in the sun on "Solar" before Chet and tenor sax great Johnny Griffen take over in "Blue Thoughts". The album also includes one bonus track, the Fletcher Henderson penned "Soft Winds", which Chet Baker and his band find enjoyment in performing. The newly released remastered album includes new liner notes from Doug Ramsey.

Thelonious Monk found success as a solo artist on his 1957 album, "Thelonious Himself" which included the well-famous "Round Midnight". He would follow it up two years later with "Thelonious Alone In San Francisco", a sequel to that first solo album. The album was recorded at Fugazi Hall in San Francisco in October 1959. On this newly remastered album we hear every note perfectly as a relaxed Thelonious Monk performs many originals including the popular "Blue Monk" and "Reflections". He also tackles some cover songs with gentle ease including Irving Berlin's "Remember". This new release includes one bonus track, the first take of "There's Danger In Your Eyes, Cherie" which finds Monk feeling he way around the song's arrangement. A wonderful addition to this already legendary album. The newly released remastered album includes new liner notes from Neil Tesser.

In 1961, Bill Evans had just recorded the album "Explorations" with one of his best trio of musicians. The album was released on Riverside Records later that year and would end up being the only album Evans would record with bassist Scott LaFaro as he would die in a car accident shortly after recording this album. By 1961, Evans was a very mature pianist and it shows right from the beginning in "Israel". The trio locks together on the up-tempo "Beautiful Love" as you feel each member feeding off each other's energy. LaFaro's bass skills shine on "Nardis" while drummer Paul Motion finishes strong with a solo on "Sweet And Lovely". The newly remastered album contains four bonus tracks including the omitted "The Boy Next Door" which just shows how smooth Evans' piano playing was at this point of his career. The newly released remastered album includes new liner notes from Ashley Kahn.

Saxophonist Julian "Cannonball" Adderley and pianist Bill Evans were once colleagues of the historic Miles Davis Sextet in 1958. Three years later, the two teamed up again to record the album "Know What I Mean?". This newly remastered album brings out the best in these two Jazz legends. Evans' piano in "Waltz For Debby" sets the stage for Adderley and the band (Percy Heath on bass, Connie Kay on drums) to fill the song with emotion. The two trade solos in "Goodbye" before combining their talents in "Who Cares?". The slow waltz of "Venice" is over too soon, but the band jumps right back into the quick notes of "Toy". The album includes three bonus tracks including a 7-minute version of "Know What I Mean?" that shows the individual talents of the quartet of musicians. The newly released remastered album includes new liner notes from Orrin Keepnews.

In 1986, Ella Fitzgerald had reached a milestone as she past the half-century mark in her singing career. Her voice was much more seasoned and seemed to have a wider range of notes for her to hit. On this release, Ella teamed up with Jazz guitarist Joe Pass for an album full of covers that have since gone by the wayside. Ella welcomes the challenge of making these songs her own by breathing new life into them. While Ella's voice is the star of this album, Joe's guitar does a great job at filling in the background until he needs to step forward with a solo. The album is very relaxing with some of the stand out songs being "My Man" which showcases the deepness in Ella's voice and "Easy Living" that just has such a smoothness to Ella's voice and Joe's guitar. The absence of drums and bass allow for Ella to do a little scat singing as in "Don't Be That Way" and " I Want A Little Girl". Joe Pass never tries to outshine Ella's voice, but does shine through on "On Green Dolphin Street". The bonus tracks on this release are an alternate take of Benny Goodman's "Don't Be That Way" and Cole Porter's "Love For Sale". Both tracks could have been the final album, but are finally released here for all to hear. The newly released remastered album includes new liner notes from Tad Herson.

All of these album were released on June 14 through the Concord Music Group. For more information on these new releases and to find out about other Jazz classics, please visit concordmusicgroup.com. Don't forget, this weekend is the 24th Annual Great Connecticut Tradional Jazz Festival at the Four Points Sheraton in Meriden, CT. Please visit myrecordjournal.com or greatctjazz.org for more information.
Posted by JP's Music Blog