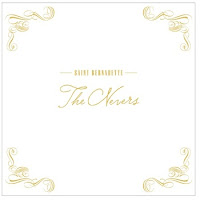 Out of Bridgeport, CT comes Saint Bernadette with their new album entitled "The Nevers". The album will be released on August 9 and was produced by Danny Kadar (My Morning Jacket, The Avett Brothers).

The album begins with "In The Time Of Moses", a raw, classic hard rocker with pounding drums and screaming guitars. You can feel the anger in lead singer Meredith DiMenna's voice as she belts out the lyrics with reckless abandonment. The album follows the feelings of a marriage falling apart as it was written as DiMenna and her ex-husband and ex-bandmate Keith Saunders's were ending their relationship. Saint Bernadette show a bluesy side to their music on "Whatcha Prayin' For", while DiMenna's sultry vocals on "I Get Lost" is broken-up by a simple, but memorable keyboard. The classic rock strut of "Take It If It's Yours" along with the lyrics of deception show the full potential this band has to offer the music community. The vocals of Saunders and DiMenna in the ballad "In The Next Go Round" shows us the passion both have in saying goodbye to their relationship. DiMenna's vocals shine once again on the closing song, "Close Enough For Me" as you hear the frailty of her voice.

Saint Bernadette just wrapped up their tour this past month. Please visit the band's website (saintbernadettemusic.com) for videos, music and more.
Posted by JP's Music Blog