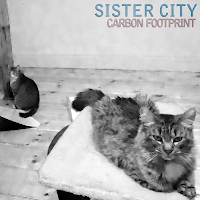 New England punk rockers Sister City have just released their most recent album "Carbon Footprint" in June. The album deals with the serious issues of death, your legacy and who you are. The album is available at http://sistercity.bandcamp.com as a pay-what-you-want download.

The album begins with "Hit Too Hard" which proudly displays the band's roots in punk music. The sound reflects a 90s-style version of punk before it became a modern polished radio staple. While lead-singer Adam Linder's vocals are not perfect on "Some Prefer Nettles", that adds to the song's overall appeal. The song "Poland, 1845" is just a great energetic piece of music about appreciating your ancestors. The band expand their sound on "Reinventing Adm Linder", taking a more alternative approach similar to the Violent Femmes or Dead Milkmen. The album closes with the 6-minute, slow-builder "How Much", a passionate song about leaving your "carbon footprint".