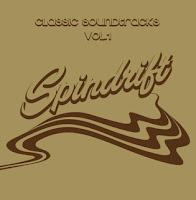 From California comes the "psychedelic spaghetti western pioneers" known as Spindrift. Their latest release entitled "Classic Soundtracks: Vol. 1" contains unreleased work that the band has done over the past years. The album mixes the musical styles of rock and country with a touch of surf guitar to make it feel like it's coming from the west coast.

The band stretches the sounds of psychedelic rock as in "Space Vixens Theme" and "Theme form Confusion Range" in order to expand you mind. "Hellbound" is like a heavy country-rock version of the theme from "Rawhide". Keyboardist Sasha Vallely lends her voice to the eerie sounds of "Shadytown" which matches together perfectly. The surf guitar instrumental "Theme from Ghost Patrol" is one of the highlights of the album drawing similarities to fellow instrumentalist Los Straitjackets. The band creates a couple mini-epics with "Legend of the Widower Colby Wallace" and the 8-plus minute "Theme from Drifter's Pass". The music is so enrapturing that you can almost image the story in your head.

Spindrift have some great videos up on their website (spindriftwest.com) as well as tour dates and song samples. Be sure to check them out and give a spin.
Posted by JP's Music Blog