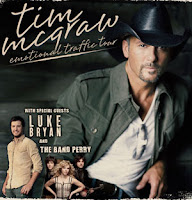 Some say that “bigger is better.” If that is true, then Tim McGraw was definitely better on his return to the Mohegan Sun arena Saturday night. Everything about his show was bigger; the stage was huge, with three separate 20 foot screens that moved to whatever the song called for. He had two giant high-definition video screens on each side of the stage and a catwalk that stretched to almost the back of the arena. Tim McGraw also had a second mini-stage set up behind the soundboard on which he began his night of country music.

Tim McGraw entered the arena from one of the back staircases, walking with a bit of a limp due to his broken foot. But, once he took the stage, the audience was all his. Fans were on their feet right from the beginning with ”Something Like That,” “Where The Green Grass Grows,” and “Down On The Farm.” Tim’s voice was smooth and strong on ”Please Remember Me” as the 44 year old performer covered a lot of ground walking up on down that catwalk all evening. McGraw also mentioned that he and his band, The Dancehall Doctors, have a new album recorded called “Emotional Traffic.” Fans were given the opportunity to hear “Right Back At Ya” and ”Better Than I Used To Be,” a couple of songs from that new album. The energy in the arena was so high; McGraw called out the opening band, The Band Perry, to perform “Can’t Be Really Gone.” The second opening act, Luke Bryan, helped out on “Back When” which brought big smiles to Tim’s face. The audience got involved singing the chorus to “Felt Good On My Lips” before Tim McGraw closed is set with ”Real Good Man.”

The band returned to the stage first to set-up the encore which included two of McGraw’s biggest hit singles “Live Like You Were Dying” and “I Like It, I Love It.” With a party like atmosphere, everyone in attendance was appreciative toward one of country’s true superstars.

The Band Perry started the evening off with a six song set that included their #1 hit single “If I Die Young.” Rising country star Luke Bryan really got things going with his hour-long energetic set that includes the hits “Do I” and “Country Girl (Shake It For Me)”. He finished with his first “top 5” single “All My Friends Say” which included a taste of Metallica’s “Enter Sandman” for the rockers in the audience.

Setlist:
Something Like That
Where The Green Grass Grows
Down On The Farm
Last Dollar (Fly Away)
Just To See You Smile
Please Remember Me
For A Little While
Right Back At Ya
Red Ragtop
Unbroken
Sail On (Lionel Richie cover)
Can’t Be Really Gone (with The Band Perry)
Do You Want Fries With That
Back When (with Luke Bryan)
Better Than I Used To Be
The Cowboy In Me
Southern Voice
Felt Good On My Lips
Real Good Man
Encore:
Live Like You Were Dying
Indian Outlaw
I Like It, I Love It
Posted by JP's Music Blog