CD Review: 2CELLOS Are Better Than One On Debut Album 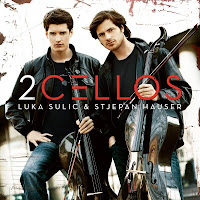 YouTube sensation 2CELLOS have just released their debut album on Sony Music Entertainment. 2CELLOS is the combined effort of Luka Sulic & Stjepan Hauser. They became a huge internet attraction with their self-made video performance of Michael Jackson's "Smooth Criminal." They've become so popular that musical legend Elton John personally invited them to join him on his summer European tour.

The album contains twelve covers of some of the biggest songs of all time. While the music the duo make is exceptional, some of the songs on this album work better than others. Some of the more outstanding tracks is their rendition of "Misirlou," "Hurt," "Welcome To The Jungle," and of course the one that started it all "Smooth Criminal." The ones that just miss the mark are the album opening song, U2's "Where The Streets Have No Name" and Sting's well-known ballad "Fragile." It seems like the faster the song, the more intense the music is. The one thing that is missing that made them such big stars on YouTube is the ability to see them perform. I hope that their next release is a live CD/DVD combo, in order to be able to see these wonderful performances.

2CELLOS have just finished up a tour of Europe and have more dates lined-up in the U.S. Then they will be spending the month of October at The Colosseum at Caesars Palace in Las Vegas opening for Elton John. If you have a chance, be sure to check them out. For more information, please visit their website at 2cellos.com.
Posted by JP's Music Blog

I really like these guys. I study to this kind of music. I love Welcome to the Jungle! http://www.youtube.com/watch?v=mSByjqMGtaU