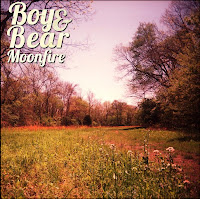 Australian band Boy & Bear released their debut album "Moonfire" on August 9 through Universal Republic. The album was produced by Joe Chiccarelli (My Morning Jacket, The Strokes, The Shins) and is already receiving some buzz on their home shore. Boy & Bear also recently performed at this year's Lollapalooza festival.

The album's first single "Feeding Line" is a great introduction to this band. The well-crafted lyrics fit perfectly within the band's alternative rock sound. The band continues on this winning trend with "Milk & Sticks" before adding a mellow, country-flavor to "Part Time Believer." Boy & Bear return to the country on the up-tempo, stomper "Golden Jubilee." It's hard to say if their passion is in alternative rock or country-folk rock. At times, their music reminds me of the alt-country group Whiskeytown, especially on "House & Farm." The album finishes with the folk-storytelling masterpiece "Big Man."

Boy & Bear are beginning to make a name for themselves in the music community and in no-time they will be mentioned with the likes of The Avett Brothers and Mumford & Sons. For more information, please check out their Facebook page, facebook.com/boyandbear.
Posted by JP's Music Blog