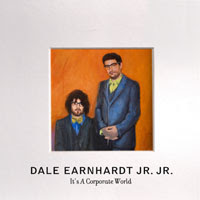 From Detroit comes the duo of Daniel Zott and Joshua Epstein, better known as Dale Earnhardt Jr. Jr. Their full-length debut, "It's A Corporate World" was released through Warner Bros. Records at the beginning of June and has received numerous positive reviews because of it's simple, but well-crafted songs.

The album begins with their first single "Morning Thought." The song contains everything, from exceptional harmonies to grunge guitars to a Beck-style keyboard driven beat. Diving further into this album, you start to witness how experimentally simple some of these songs are, while you try to dissect their sound. The song "Skeletons" takes advantage of the off-beat while you find yourself concentrating on the lyrics. The group hops back to the eighties with a generic dance beat on "An Ugly Person On A Movie Screen" as obscure sounds and voices swirl around in your head. The band seems to embody the experimental sounds of the sixties in "If It Wasn't You..." then jumps to the seventies with disco beat of "Vocal Chords." The duo rock on "We Almost Lost Detroit" before finishing with the acoustic, country sound of "The Fisherman." Don't let the name of this band fool you, the music is top notch and definitely worth your attention.

Dale Earnhardt Jr. Jr. will be on tour in the US through the month of September. Be sure to check out their live show as they have been known to perform in NASCAR gear, which is how they got their name. For more information on this new band, check out their website, daleearnhardtjrjr.com.
Posted by JP's Music Blog