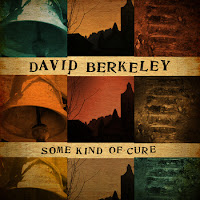 Singer/songwriter David Berkeley has released his fourth studio album entitled "Some Kind Of Cure." Yahoo! Music has praised the album as one of the ten albums of 2011 that should be in every home. After hearing the album, I tend to agree and so will you upon listening.

His earthy voice and gentle acoustics make the perfect sense. The song "Independence" sounds like it came from Cat Stevens songbook as David handles the vocals with ease. David paints such a picture with his lyrics like in "Parachute" that you can't help but get wrapped up in David' music. The closest he comes to a mainstream pop song is the up-tempo acoustic rocker "Hope For Better Days." While his version of the folk classic "Shenandoah" is amazing, David straps on an electric guitar for his solo on "Soldier's Song." He counters that with the simple acoustics of "Homesick" and "Marie" before finishing with the country sounds of "All Those Ashes" and the slow build-up of "Winter Winds."

David Berkeley has a tour dates starting at the end of August. He will be making his way east, performing at the Holcomb Farm - Concert in the Loft in Granby, CT on October 14. For a complete list of tour dates and song samples, please visit his website, davidberkeley.com.
Posted by JP's Music Blog