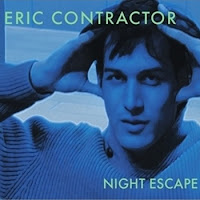 Singer/songwriter Eric Contractor recently released his debut album entitled "Night Escape." The sound in this album is very cinematic. Eric captures the mood in the opening track with his strong, almost hypnotic voice, while his music swirls in the background. Eric's deep, baritone vocals bring up comparisons to Johnny Cash on the country sounds of "Never, Never." Eric puts on his seductive suit with his suave vocals on "Driving Down The Coast." He then comes back with the up-tempo, Talking Heads sounding "Ain't No Love." His voice fits perfectly in the ballad "Prince of the Shadows" as his vocals never overpowers the song. The album finishes with his strongest effort in "Visions of Aphrodite."

The album was self-released back in April and is available on iTunes and CDBaby. For more information, please visit Eric's website ericcontractor.com.
Posted by JP's Music Blog