CD Review: From England Comes Spring Offensive With US Debut 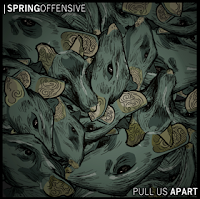 From Oxford, England comes alternative rockers Spring Offensive with their US debut album, "Pull Us Apart." The album features the same songs as on their UK release, but with one bonus song, "The First of Many Dreams About Monsters" which plays out over 13 minutes.

The band's sound on the opener, "I Found Myself Smiling" is very stark, as the song builds with intensity. The passion that Spring Offensive have is shown in the song "Every Coin" as the energy is felt pouring through the speakers. The gentle beginning of "The Cable Routine" shows another dimension to this group's talent for song-writing. Their mainstream sound is found in the song "Slow Division" as the band plays it safe with its instrumentation and mellow lyrics. The mellowness continues into "Little Evening" before the album closes with the new epic, concept song "The First of Many Dream About Monsters."

The band is heading over to Germany for some shows in October, but keep checking their myspace page (myspace.com/springoffensive) for new dates to be announced.
Posted by JP's Music Blog