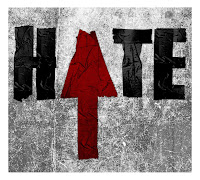 American rock band Hawthorne Heights released a greatest hits compilation last year, capping off their first 10 years of existence. Now they return to begin the next decade with a new EP entitled "Hate." The album will be the first release on the the band's own record label, Cardboard Empire.

The album begins with a short rap that sets up the subject matter for the rest of the EP, which deals with hate, anger and solitude. The band combines their aggressive vocal attack along with some nice harmonies to portray the feelings of disarray. Their energetic assault begins to come out on "Divided" and "Wasted In NYC," while the lyrics of "Hate" deal with feelings that everyone has felt at one time or another. The big drums of "Oceans" carry a large arena rock sound that the band will capital on in a live setting. The shout out loud lyrics of "Four White Walls" sounds like a battle cry for today's youth, while "Passengers" closes the album with one of the more mainstream alternative songs that is sure to find a home with fans.

The new album will be released on August 23, and pre-order packages are already available on the band's website, hawthorneheights.com. The band will be performing August 24 at the Wolf's Den at the Mohegan Sun Casino in Uncasville, CT. They have dates scheduled through the end of October so check the website for more information.
Posted by JP's Music Blog