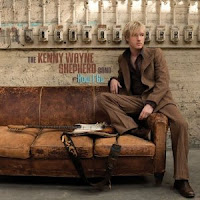 Blues prodigy Kenny Wayne Shepherd began his career when he was 18 years old, gathering accolades from fellow blues musicians. He holds the record for the longest running album on the Billboard Blues Chart with his sophomore release "Trouble Is..." Now he is 34, and is considered one of the best modern blues guitarist around. He also has a new album out on August 2 entitled "Here I Go" which is sure to continue his streak of blues albums to reach #1 on the Billboard Blues Album chart.

Kenny makes his presence known right from the opener "Never Lookin' Back." The winning combination of Shepherd's guitar and Noah Hunt's vocals give the originals like "Come On Over" and "Show Me The Way Back Home" a freshness that modern rock is looking for. Shepherd and Hunt stick close to the original on their cover of The Beatles' "Yer Blues," but open the floodgates on Bessie Smith's cover "Backwater Blues." The band try their hand at a southern rocker with the song "Cold," but Shepherd's guitar only shows up in the solo. One of the highlights of this album is the pure blues of "Dark Side Of Love" as Shepherd and Hunt play off each others talents. The band rocks on "The Wire" before slowing down for the acoustic sing-along "Who's Gonna Catch You Now." The album closes with the Kenny Wayne Shepherd instrumental "Strut" which shows off the unity of the band behind Shepherd's outstanding solo.

Kenny Wayne Shepherd and his band are currently on the road promoting the new album. Look for them to visit the New England area at the end of August. For a complete list of tour dates and more information on this new album, please visit his website, kennywayneshepherd.net.
Posted by JP's Music Blog