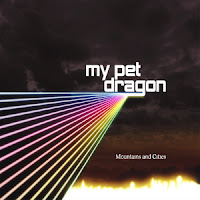 Out of New York comes My Pet Dragon with their new release "Mountains and Cities." My Pet Dragon was the brainchild of Todd Michaelson with help from Reena Shah. The band's new album was produced by former Ministry drummer Stephen George and includes contributions from Gov't Mule, Mercury Rev, Hurricane Bells and others.

The album begins with a great pop rock sound that is missing from today's rock radio. The song "Majestic Lovers" introduces us to lead singer Todd Michaelson's wonderful lyrics and his smooth tenor voice. The up-tempo "Moonshine" walks that fine line between rock music and dance-hall pop. The flow of the album does switch between dance beats ("Lighting Inside") and rock pop energy ("Songbird"). The first single, "Flow" captures the energy of a dance club with great lyrics about just letting go and feeling free. My Pet Dragon show us a softer side with the acoustic based "Siren." The album's second single, "Lover In Hiding" is the most mainstream song on the album that would sound right at home on today's radio. The way Todd structures the song's lyrics keeps it interesting without losing the listeners' attention.

My Pet Dragon have a few shows lined-up in the New York area. Check out the band's website (mypetdragon.net) for more information as well as song samples from the new album "Mountains and Cities."
Posted by JP's Music Blog