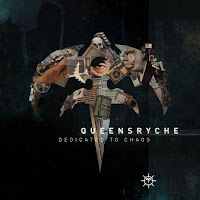 Progressive hard rockers Queensryche are celebrating their 30th anniversary of existence as a band in 2011 with a world tour and a new album. The tour has been selling very well and the new album entitled "Dedicated To Chaos" entered the Billboard Album charts at #70.

The new album was released at the end of June and it is the band's first release on Roadrunner Records. The band tries to tackle too many topics on this new release. Instead to reminding fans why they were once one of the biggest names in heavy metal in the 1980's, they try to update their sound and make it more pop friendly.

Beginning with the appropriately titled, "Get Started", Queensryche seem to begin were they left off with an arena rocker that has a simple, sing-along chorus. Things start to fall apart on "Got It Bad" where lead singer Geoff Tate sounds like David Bowie on this over-polished pop rock song. The band continues along the mainstream with "Higher" adding horns to the band's sound. Queensryche does manage to capture some of that lost rock power on "At The Edge" and "I Take You" as the band shows us and edgier side to their new updated sound. With songs like "Retail Therapy" and "The Lie" the future looks bright for Queensryche's next album.

The band's 30th anniversary tour continues into November. Be sure to catch them live and witness how good this band has been over the course of thirty years. For more information on their new album as well as tour dates, check out queensryche.com.
Posted by JP's Music Blog