CD Review: Scars On 45 Give Us "Something" 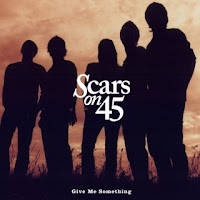 Music is found in the most unlikely places. Scars on 45 co-founder Danny Bemrose was never planning on becoming a musician, but after he broke his foot as a professional soccer player over in England, he decided to borrow his father’s guitar. As they say, the rest is history as Scars on 45 was born in Leeds, England. The band’s first EP ”Give Me Something” was released early in 2011, but has started to find a home on radio and television. Songs from the band’s catalog found their way onto the A&E series “The Cleaner” as well as on “CSI: New York.” Along with that, the band has been touring extensively throughout the U.S.

The EP begins with the title track which carries a very simple, acoustic rock sound with some great lyrics about finding love. The band sticks close to this formula hitting their pop stride on “The Way That We Are.” The album closes with a nice, quiet acoustic song called “Don’t Say” that nicely highlights Bemrose’s vocals.

The band is currently on tour in the U.S. and will be performing at the Ridgefield Playhouse in Ridgefield, CT on September 29. For a complete list of tour dates as well as more information on this new rising band, please visit their website, scarson45.com.
Posted by JP's Music Blog