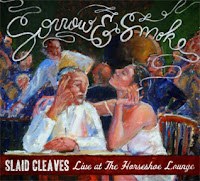 Country artist Slaid Cleaves is ready to release his first live album "Sorrow & Smoke: Live at the Horseshoe Lounge." The double-disc set will be available on September 6 through Music Road Records. After twenty years in the business, this release is a good retrospective of his entire career. The album is full of stories and songs that will make any listener a fan of his music.

Slaid's singing and stories put you right in the audience at the Horseshoe Lounge. The local fans love the song about their own watering hole as the song "Horseshoe Lounge" receives a grand applause. Slaid also takes requast for old favorites like "Below" and "Broke Down." He brings out the country-blues on "Sinner's Pray" which delights audience members. Slaid's folk-storytelling on "New Year's Day" draws up memories of Arlo Guthrie and Bob Dylan. Slaid pays tribute to his late yodeling master Don Walser with a couple of covers, "Texas Top Hand" and "Rolling Stone From Texas." Then, Cleaves returns with a 7-minute version of his most requested song "Breakfast In Hell." Slaid Cleaves finishes with the "feel good" song of hope, "Go For The Gold."

Slaid Cleaves will be on tour out on the west coast at the beginning of September before heading over to Europe. But look for Cleaves to return to the US in October performing along the east coast. For tour dates and information, please visit slaid.com.
Posted by JP's Music Blog